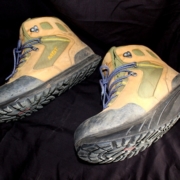 In 2009 Kathy suffered a very serious fracture to her right ankle after falling from a horse. The break was so severe that it was touch and go whether or not her leg could be saved. But, under the care of her local hospital, her leg was in plaster for six weeks, and then in an external fixator for a further six months. However she was referred to the limb reconstruction unit at Kings College Hospital for a bone graft, and was there fitted with a Tailor Spatial Frame (TSF), which she wore for another six months. In December 2013 she had her last surgery, and was fitted with her second, and final, TSF which she had to wear until May 2014. Her treatment was very successful.

But the injury had left Kathy with a right leg two centimetres shorter than her left, and a flat foot, due to the way the bones had fused. Consequently she needed specialist orthotic shoes to adjust her gait and minimise the pain. It was a problem to find footwear which was functional and comfortable, let alone aesthetically pleasing. The standard orthotic shoes available didn’t really provide the solution that Kathy needed.

The options are extremely limited for everyone, but it’s especially difficult for women who might need different footwear for different occasions – wearing a skirt or for formal occasions, for example. For many years, Kathy wore Fly wedges https://flylondonshop.co.uk/womens/wedges?filter=1&category%5B%5D=12, for the extra bounce they have in the sole, adding a thick insole in the right shoe for balance, but it was not an ideal solution, and didn’t lessen the discomfort. She found herself wearing Crocs clogs https://www.crocs.co.uk/on/demandware.store/Sites-crocs_gb-Site/en_GB/Home-Show or even mismatched shoes. Once, in desperation, Kathy went to a ball with trainers on her feet!

After five years of struggling on (and spending a fortune on footwear which didn’t ever really do what she needed), at the suggestion of REBUILD Kathy spoke to the London Orthotics Consultancy https://www.londonorthotics.co.uk/orthotics/ about options to create bespoke shoes to match exactly her requirements. It was important to find a right shoe which not only had a small raise but which rocked a little, giving her the gentle placement and lift she needed. Rebuild undertook to cover the cost.

As she really wanted to be able to walk outside on muddy terrain, in all weathers, Kathy needed supportive footwear which kept her feet dry and enabled her to walk with stability. She managed to find on ebay https://www.ebay.co.uk/b/MBT-Womens-Shoes/3034/bn_774468 a pair of MBT walking boots https://uk.mbt.com/mbt-technology – a very rare find! – which it was possible for LOC to customise for her: right shoe at optimum height and rock for her shortened leg, left shoe flattened to accommodate.

The result was amazing. 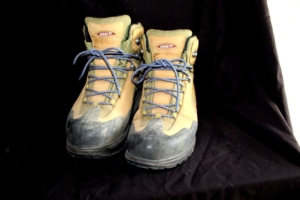 Kathy says, “The LOC did a fantastic job, and the boots they created for me are out of this world – I am really pleased. It’s made a huge difference to me. I so wanted to be able to walk with my dogs again in the countryside and never dreamed I would be able to do so. It would not have been possible without the involvement of REBUILD”.

Since then, Kathy herself has had a pair of suede boots adapted, which means that she can wear skirts and dresses in the winter. She now knows exactly which shoes can and can’t be altered, which presents many opportunities for the future for orthotic shoes which look attractive.

“It seems such a small thing”, says Kathy. “No one really thinks about footwear after a nasty accident and limb reconstruction surgery to your leg. After all, the most important thing is the successful healing of the injury. But without shoes which fit properly and lessen the pain, and enable you to do what you want to, life can be so limiting. Your world becomes much smaller, and you’re unable to do so many of the things which get you out and about – the things which give you joy. I am eternally grateful to REBUILD for paying for my first pair of customised orthotic shoes – it changed my life and gave me back some of the normality I had lost.” From October 2019, patients of the limb reconstruction unit at King’s College Hospital (KCH) can access free, confidential, independent and impartial advice and support on all aspects of welfare benefits, employment issues, housing issues and mobility guidance from Citizen’s Advice Southwark https://www.citizensadvicesouthwark.org.uk. in a weekly face-to-face clinic based in the hospital. This initiative is funded by REBUILD, the charity which supports limb reconstruction patients at KCH on their journey to recovery and rehabilitation.

Patients undergoing limb reconstruction treatment often have complex needs, due to the lengthy treatment which can incur prolonged periods of reduced income, unemployment or limited mobility. Advice is available on:

Welfare benefit issues, encompassing problems relating to claiming, maintaining or disputing awards, such as Universal Credit, Personal Independence Payment or Attendance Allowance. These are all benefits which often relate to disabilities or ill-health, and so are especially relevant to patients undergoing lengthy limb reconstruction treatment.

Employment issues, where patients may face difficulties with contractual or statuary sick pay, or returning to work after a long period of sick leave and dealing with reasonable adjustments.

Housing issues, which may involve dealing with rent arrears, homelessness, disrepair and eviction.

Mobility issues, for those seeking advice on discounts and exemptions for travel on public transport and taxi services, and eligibility for a Blue Badge https://www.gov.uk/government/publications/blue-badge-can-i-get-one which may grant additional concessions, including disabled parking and exemption from road tax.

Advice is by appointment every Monday 9.30am – 12.30pm in Suite 3, in the Trauma and Orthopaedic Outpatients Department.

COVID -19: PLEASE NOTE THAT FACE TO FACE APPOINTMENTS MAY BE SUSPENDED AT PRESENT.